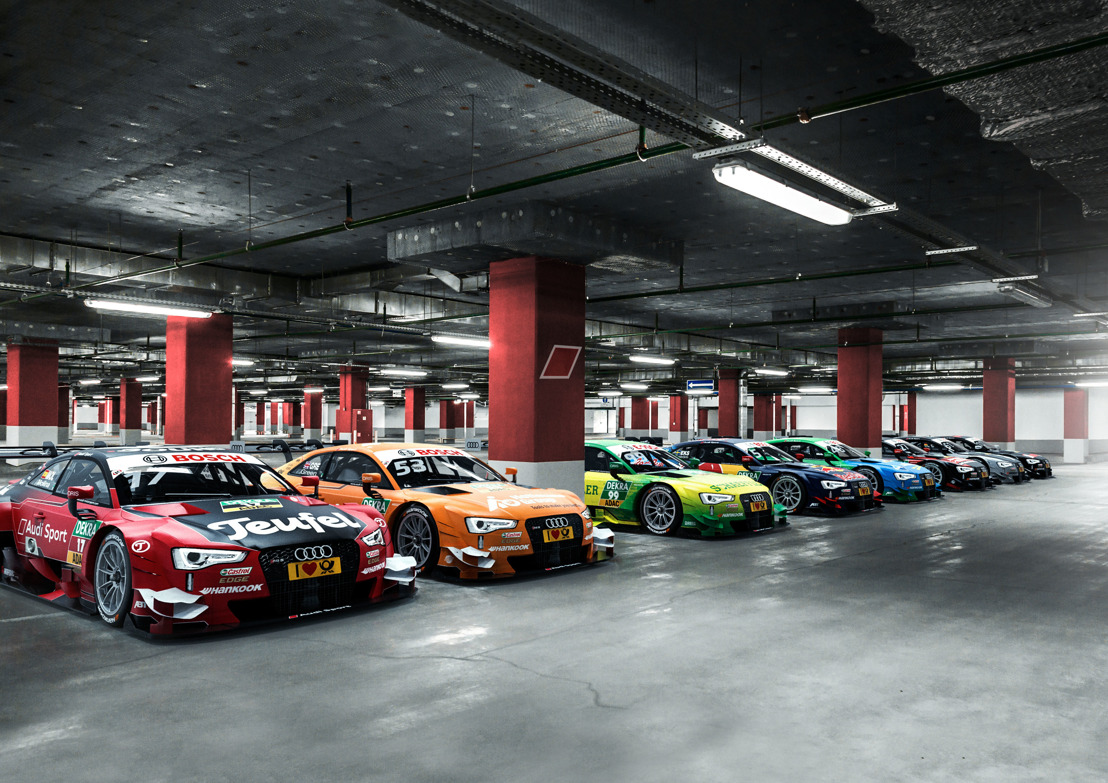 Before the season opener at the Hockenheimring on May 7 and 8, all DTM teams will be testing their race cars once more at the Hockenheimring. From April 5 to 8, Audi fans will have the opportunity to see the 2016 models sporting their new colors for the first time. Audi Sport has opted for a mix of continuity and innovation. The matte look of the eight Audi RS 5 DTM cars is a new feature with a technical background. Due to a new type of wrap, weight amounting to about one kilogram can be saved per car. “As the DTM is known for being a series in which even the smallest details matter, we’re delighted about this further improvement of our cars’ performance that we’re achieving together with our partners,” says Dieter Gass, Head of DTM at Audi Sport.

One of the partners made particularly consistent use of the new technology. In terms of colors, Mike Rockenfeller’s Schaeffler Audi RS 5 DTM is clearly greener, as well as more progressive, in 2016. The technology corporation’s “Mobility for tomorrow” slogan is reflected by the hundreds on the carbon body of the RS 5 DTM.

A car without which the DTM would be inconceivable is Mattias Ekström’s blue Red Bull Audi RS 5 DTM. For more than a decade, the Swede has been competing for Audi in the DTM under the energy drink manufacturer’s banner.

Another catchy color is the orange that stands for Jamie Green and the Hoffmann Group. The Munich-based system partner for quality tools and Audi’s best DTM driver last year are now tackling their third joint DTM season in 2016.

The Italian Edoardo Mortara is competing again sporting the green and light blue colors of ARAL ultimate and Castrol EDGE, and the Spaniard Miguel Molina in the black-red Audi RS 5 DTM wrapped in the livery of the Berlin-based company Teufel. The audio and hi-fi specialist has extended its partnership with Audi Sport following its successful debut season in 2015.

Timo Scheider will be on the grid again in a black Audi RS 5 DTM, but with new logos of the AUTO BILD MOTORSPORT special-interest magazine which, like the previous partner, AUTO TEST, belongs to the Axel Springer group of publishing houses.

A black-gray color scheme is featured by Nico Müller’s Audi RS 5 DTM. The youngster from Switzerland is competing in the colors of the men’s magazine Playboy and the new Audi Sport racing academy that retains young talents for Audi Sport at an early stage.

As in the past, all eight cars additionally bear the logos of Akrapovič, Castrol, Cisco, Eibach, ORIS and OZ Racing. Other partners of Audi Sport in the 2016 DTM are Alpinestars, Audi Top Service, Gerolsteiner, the Hofmühl brewery, MAN and DIE WELT. A new logo to be featured is the hashtag #LeagueofPerformance, which stands for the Audi Sport brand with its R and RS models.

All eight Audi drivers and seven of the eight Audi RS 5 DTM cars will be taking part in the pre-season tests at the Hockenheimring. A test vehicle of the Audi RS 5 DTM fitted with additional sensors and measuring equipment will be deployed as well. The southern grandstands at the Hockenheimring will be open to fans from Tuesday (April 5) to Friday (April 8). The pre-season tests will be held on all four days from 08:00 to 12:00 and from 14:00 to 18:00. Admission will be free.